Ductile Iron pipe is considered as the most preferred pipe material for water supply and pressure sewerage application all over the world. It offers higher Tensile Strength than Mild Steel and retains the inherent corrosion resistance of cast iron. Pipes made from Ductile Cast Iron, provides substantial benefits in terms of pressure bearing ability, impact resistance and capacity to sustain external static/ dynamic loading.

Ductile Iron Spun Pipes are produced in both as per Thickness Class (like, K9, K7 etc) and Pressure Class (Like C25, C30, C40 etc). The Standard Products are listed below.

A. Ductile Iron Socket and Spigot Pipe with Push-On Joint from DN 80 to DN 1000 with Rubber Gasket conforming to IS 8329/ ISO 2531/ EN 545/ EN598 for Drinking Water and sewerage. Ductile Iron pipes are available in the following Joints
Push-on
Push On (Restrained)

Inside Lining
Ductile Iron Pipes installed in water systems today are normally provided with cement mortar lining. Use of cement lining of the pipe avoids tuberculation by creating a high pH at the pipe wall, and ultimately by providing a physical barrier to the flow water to contact with the pipe wall. Further, linings are also smooth, which results in high coefficients with Haizen Willams C as 140 (Colebrook coefficient k = 0.1). In case of sewerage application, suitable lining will provide corrosive resistance to septic transformation (cycle of sulphates, sulphuric acid) to avoid severe carrion to pipe wall. The advantages of internal cement mortar lining are:

Outside Coating
Intrinsic corrosion resistance of Ductile Iron in various corrosive soils is as least as good as and even somewhat better than that of Cast Iron, as there is not much variation chemically between the two materials. When subjected to corrosion, the nodular graphite of ductile iron pipes forms corrosion by products that adhere firmly to the unattached metal, which provides a barrier against further corrosion. In addition, uniform spreading of spheroidal graphite of ductile iron results in less susceptible to deep localized pitting than that of grey iron pipe, which is important in evaluating its relative resistance to failure by perforation. Due to rubber gasket jointing, ductile pipes are electrically discontinuous. As a result, long line corrosion current, which is dependent on exposure of a single electrical unit to varying soil conditions, cannot develop. Additionally, any accumulation of stray current is limited to short electrical units and usually is of little significance in developing corrosion.

Flanges
Flanges are flat rings around the end of pipes which mate with an equivalent flange from another pipe, the two being held together by bolts usually passed through holes drilled through the flanges. A deformable gasket, usually elastomeric, placed between raised faces on the mating flanges provides the seal. Flanges are designed to a large number of specifications that differ because of dimensional variations in pipes sizes and pressure requirements, and because of independent standards development. In the U.S. flanges are either threaded or welded onto the pipe. In the European market flanges are usually welded on to the pipe. In the U.S. flanges are available in a standard 125lb. bolt pattern as well as a 250 lb (and heavier) bolt pattern (steel bolt pattern). Both are usually rated at 250(1,700kPa). A flanged joint is rigid and can bear bothtensionandcompressionas well as a limited degree ofshearandbending. It also can be dismantled after assembly. Due to the rigid nature of the joint and the risk of excessive bending moment being imposed, it is advised that flanged pipework is not buried.

Spigot and socket
Spigot and sockets involve a normal pipe end, the spigot, being inserted into the socket or bell of another pipe or fitting with a seal being made between the two within the socket. Normal spigot and socket joints do not allow direct metal to metal contact with all forces being transmitted through the elastomeric seal. They can consequently flex and allow some degree of rotation, allowing pipes to shift and relieve stresses imposed by soil movement. The corollary is that unrestrained spigot and socket joints transmit essentially no compression or tension along the axis of the pipe and little shear. Any bends, tees or valves therefore require either a restrained joint or, more commonly, thrust blocks, which transmit the forces as compression into the surrounding soil.A large number of different socket and seals exist. The most modern is the ‘push-joint’ or ‘slip-joint’, whereby the socket and rubber seal is designed to allow the pipe spigot to be, after lubrication, simply pushed into the socket. Push joints remain proprietary designs. Also available are locking gasket systems. These locking gasket systems allow the pipe to be pushed together but do not allow the joint to come apart without using a special tool or torch on the gasket.The earliest spigot and socket cast iron pipes were joined by filling the socket with a mixture of water, sand, iron filings and sal-ammoniac (ammonium chloride.)Agaskinring was pushed into the socket round the spigot to contain the mixture which was pounded into the socket with a caulking tool and then pointed off. This took several weeks to set and produced a completely rigid joint. Such pipe systems are often to be seen in nineteenth century churches in the heating system.

In mechanical joint, sealing is achieved by applying pressure on the gasket by a separate gland. When bolted with the pipe, the gland exerts pressure on the sealing rubber gasket and makes the joint leak proof.

Restrained Joint Push-on Type for Buried Pipes
Restrained Joints are special jointing system, which can take care of axial movement in case of thrust. Hydraulic thrust forces occur in pressurized mains, when there is any change in direction (bends, tees) or any change of diameter (tapers, valves) or any pipeline end (blank flanges or caps). These special joints are necessary on fittings and a few pipes adjacent to the fittings. Restrained Joints eliminate use of concrete anchor blocks, which are costly and delay the progress of laying operation. 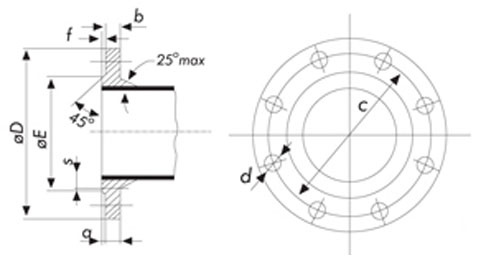